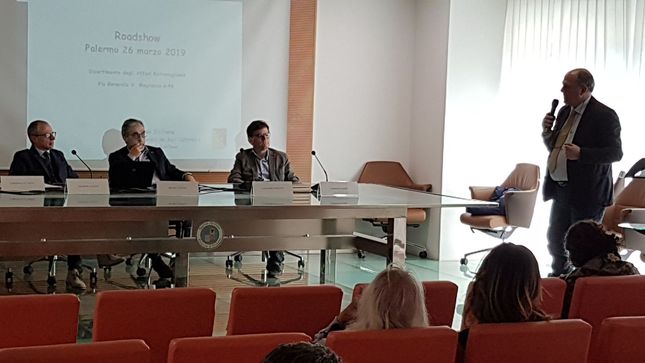 The Kick-Off Meeting of the Institutional Stakeholders of regional level, was held on 26 March 2019 at Palermo. The meeting aimed to coordinate the role of the regional Authorities and stakeholders within the project in general and by reference to the target area, the Province of Ragusa.

Partner: Sicilian Region - Department of Cultural Heritage and of Sicilian Identity (IT)
Pilot area: Ragusa and its province
When: March 26th in Palermo and 3 days to be organized on October 1st in Acate, 2nd in Ispica and 3rd in Ragusa.

During the works, it was illustrated to the participants the Coasting Project and its strategies, objectives, main criticism of the pilot area, the reasons why the territory of Ragusa was chosen and the results expected.

In particular, the Responsible for the international cooperation projects illustrated actors and objectives of the COASTING project;

The Superintendent for cultural heritage and landscape of Ragusa described the landscape peculiarities of the coast of Ragusa and the main factors of criticism,

The representative of the Superintendence of the sea exposed some projects of exploitation of coastal and marine sites of cultural interest of the Province of Ragusa and the experiences of exploitation of underwater archaeological sites in front of the Sicilian coast.

After having described the methodology for involving local actors in the elaboration of the memorandum of understanding and of the action plan leading to the Coastal Contract, a debate was held with the stakeholders. During the debate, that was intense and participated with the maximum interest, the subsequent steps of the roadshow were defined. In order to involve local actors and stakeholders in the process, the next meetings, in a number of three, will be held in the Province of Ragusa. They will be targeted to the local communities and it is foreseen the organization of thematic tables to disseminate intervention strategies and to gather the various suggestions and expectations rising from the territory. The meetings are scheduled in the month of October 2019.

All news
Back to top